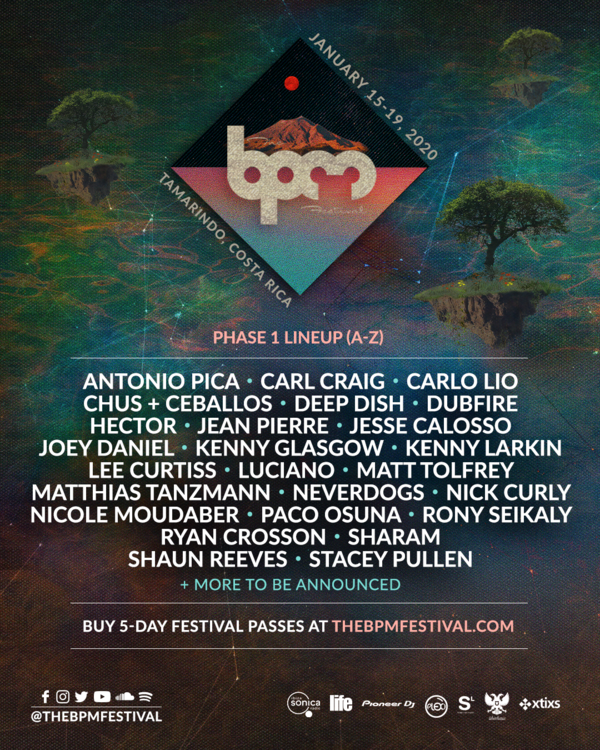 Already one of next year’s most highly-anticipated events, The BPM Festival has revealed its phase 1 artist lineup for the inaugural edition of The BPM Festival: Costa Rica from January 15-19, 2020. Among the first names announced for the festival’s return to its traditional post-New Year’s Eve gathering are Carl Craig, Chus + Ceballos, Hector, Luciano, Matthias Tanzmann,Nicole Moudaber, Paco Osuna, Stacey Pullen, and more. In addition to solo sets from both Dubfire and Sharam, the revered musicians will also reunite as Deep Dish as the GRAMMY-winning duo will play a rare set on the beach on opening-day at BPM for their only 2020 Costa Rican performance. A key date on the international festival circuit for artists, industry professionals, and underground dance music fans for over a decade, The BPM Festival: Costa Rica will be the perfect kick-off to the new year while dancing in and exploring the beautiful surf town of Tamarindo and the stunning natural surroundings of the Costa Rican Gold Coast.

Located in Costa Rica’s northwestern edge in the province of Guanacaste, Tamarindo is a coastal modern surf town along the Pacific Ocean approximately one hour from Liberia International Airport (LIR). With a dry tropical climate that sees blue skies nearly all year round with spectacular sunsets daily, Tamarindo offers the ideal setting for dancing on its picturesque beaches and exploring everything Guanacaste province has to offer.

Early bird and Tier 1 festival passes are SOLD OUT! Five-day Tier 2 festival passes for access to all of The BPM Festival: Costa Rica’s showcases are on sale now while supplies last at www.TheBPMFestival.com via Xtixs.

+ many more to be announced!

About The BPM Festival

The BPM Festival, which stands for “Bartenders, Promoters, Musicians” was created in 2008 and held in Playa del Carmen, Mexico until 2017 as a post-New Year’s gathering of industry professionals. During that time it had grown to a ten-day festival with a 70,000+ global gathering of DJs, producers, revelers and industry professionals. A must for any music lover with a discerning taste for quality underground dance music, BPM parties were hosted during the day and night at multiple venues throughout the beach resort town.

Since its inception in 2008, The BPM Festival has expanded its footprint on the global dance scene and hosted several one-off events in leading dance music hotspots including Bali, Barcelona, Beirut, Brazil, Dubai, Ibiza, Mykonos, New York City, Toronto, and the Zurich Streetparade, where it had its own dedicated BPM float in 2017 and 2018.

Stay connected with The BPM Festival: