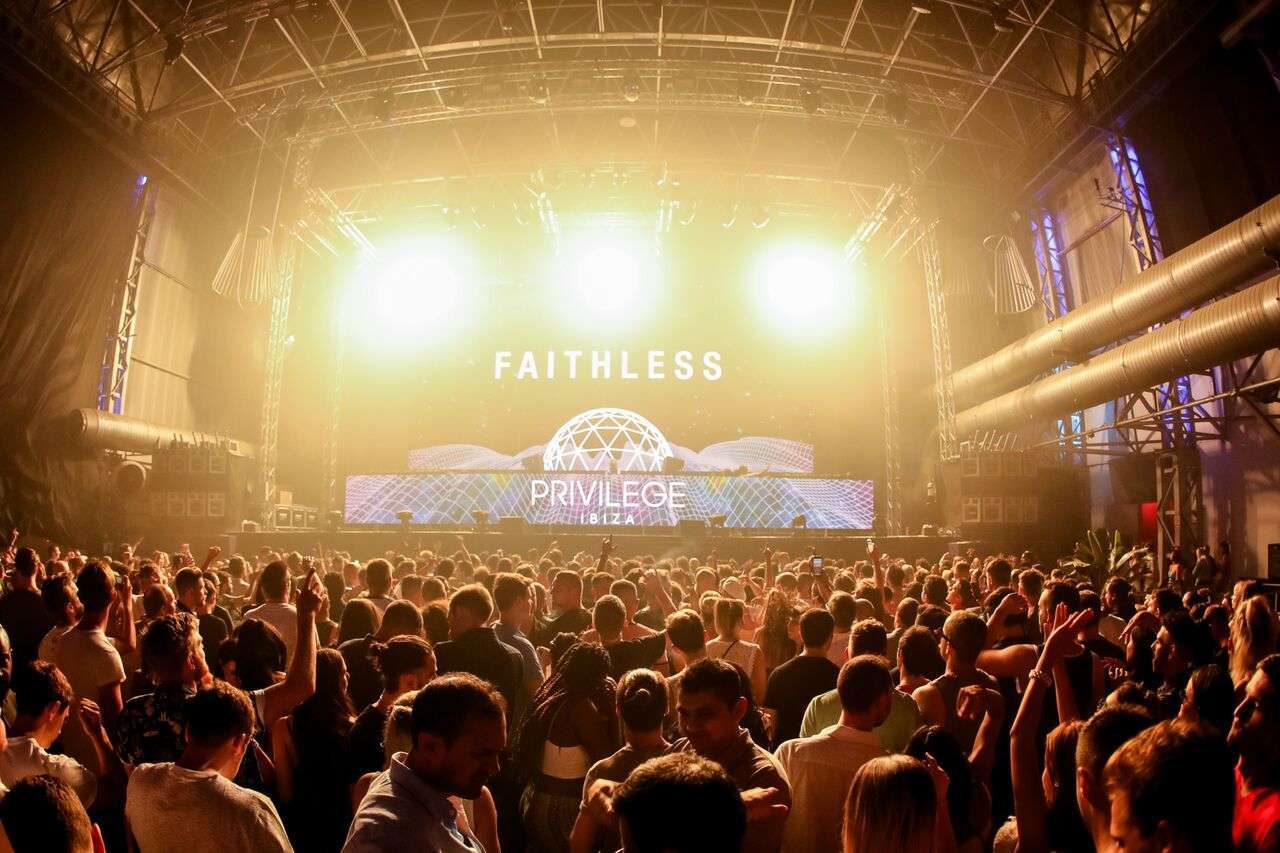 Privilege Ibiza ushers in the club´s 25th season with an impressive host of DJ talent, and a carefully curated party calendar showcasing some of the best names in the scene

After a successful 2017 season, Privilege Ibiza is gearing up for another year of musical bliss. With Shine Ibiza on Mondays at Privilege, Trance has found a new sanctuary for its family. Paul van Dyk, Aly & Fila and more than 20 DJs celebrate SHINE Ibiza, an 11-week run, Mondays July 9 to September 17, at Privilege’s Vista Club. Tuesdays belong to Resistance and their mammoth nine-week residency at the biggest club in the world, beggining with the Opening Party on 17 July and running every Tuesday until the massive closing party on 11 September. Thursdays are all about the glamorous SuperMartXé and Fridays showcase the urban sound party IAMARICHB**CH, while Solid Grooves takes the infamous Sunday slot at Privilege Ibiza this summer

SHINE Ibiza will be the centre stage for the truest form of Trance on the White Isle. Of the move, legendary DJ and long-time Ibiza club-resident Paul van Dyk says: “what SHINE offers, is a world of opportunities – a hub to an international community and a place where we belong no matter where we’re from. The trance family is a global collective of positive, caring and fun-loving people. Myself, my fellow DJs, the event organizers and club staff will go the extra mile to provide the best possible experience for them. I look forward, with the greatest anticipation to seeing you at SHINE!”

The Club Vista-based nights will take place each Monday from the 9th of July to September 17th. Completing its line-ups throughout the season, Paul will be joined by DJs including Aly & Fila, Bryan Kearney, Simon Patterson, Cosmic Gate, Neelix, Grum, Ben Nicky and others. First and foremost, SHINE is aimed at trance-conscious music lovers seeking mind-blowingly produced nights, packed with magic, energy and light, but overall that essential familiar spirit.

Nick Ferguson, MD of Supernova Group and former Cream Ibiza promoter explains: “Trance has deep roots on the island of Ibiza. It’s been the spiritual home to its positive, uplifting sounds since the 90s. SHINE Ibiza wants to bring this spirit back, the human factor. Everybody is part of SHINE – DJs, guests and staff alike. We all come together to have a great time, meet old friends, make new friends, enjoy our favourite music in long DJ sets with amazing production and a breath-taking view of Ibiza’s sunrise”. SHINE residents Aly & Fila added “We are very much looking forward to being part of SHINE Ibiza this summer. It is great to see this dedicated Trance event on the White Isle. See you several times over the summer!”

Vista is the club within a club – the world’s biggest club to be exact. Over the last five + years it has earned its name and reputation trhough its atmosphere and singular location. Beamed down UFO-like onto Privilege’s voluminous terrace, by night its glass pyramid structure is an awe-inducing place to dance. As dawn breaks, Club Vista irradiates to reveal a once-seen, never-forgotten panorama. With an outlook across La Isla Blanca, it stretches right the way to Dalt Vila. Sunrise sets at Vista are an experience that’s left trip-defining impressions on tens of thousands. Through the amplitude of its glass grandstand, its night-to-day transitions are evermore a 21st century clubbing rite of passage. Uniting the music with the scenic into one multisensory experiencing, it’s this perfect backdrop that SHINE has chosen for their Ibizan adventures.

More to be announced…

More to be announced…

AND PROGRAMMING FOR 9 WEEK 2018 SEASON

5 IBIZA-EXCLUSIVE BACK TO BACK PERFORMANCES

RESISTANCE Ibiza has announced the full line-up for its mammoth nine-week residency at the biggest club in the world, Privilege. The monumental residency will begin with the Opening Party on 17 July and runs every Tuesday until the massive residency closing party on 11 September.

ANNA B2B Fancesca Lombardo, Charolette De Witte, Enrico Sangiuliano, Ida Engberg, Joris Voorn and Stephan Bodzin Live are just some of the prestigious names amongst the scores of techno superstars that have been added to the already impressive roster.

For the Opening Party Seth Troxler, Loco Dice and Sasha | John Digweed will headline the Main Room, while Charlotte de Witte, Joris Voorn, Dense & Pika and Andres Campo will play on the Terrace.

The following week will see Richie Hawtin merge his famous PLAYdifferently presents Analogue/Digital concept with RESISTANCE. The Main Room, ‘Digital’, will feature the man himself along with a rare Dubfire b2b Nicole Moudaber b2b Paco Osuna set as well as well as performances from Matador (Live) and Fabio Florido. Nastia, ANNA B2B Francesca Lombardo, Hito and Lauren Lo Sung will curate ‘Analogue’, a vinyl-only experience on the terrace.

Carl Cox will make his RESISTANCE Ibiza debut for his birthday alongside faithful fans and friends for Week 3. Jamie Jones, Nic Fanciulli, and Eric Powell will take over the decks alongside Carl to throw him a birthday blowout for the books, with Eats Everything and Sasha | John Digweed on the terrace after a special B2B set between Carl and Nic for the first time since Space Ibiza’s historic, final closing party in 2016.

Guaranteeing a Closing Party to remember, the nine-week celebration will wrap on 11 September with Carl Cox reclaiming his throne for a solo set and a first time B2B with Maceo Plex.  Sasha | John Digweed and Patrice Bäumel will also grace the Main Room decks. Dense & Pika, Skream, Josh Wink B2B Butch and Popof will simultaneously take over the decks on the Terrace to cap off the immense season.

View the full lineup and program below. Tickets for all nine RESISTANCE Ibiza parties go on sale 9 May. For a chance to purchase the lowest price tickets, register now at resistanceibiza.com.

THURSDAYS – SUPERMARTXE – from 7 June until end of September

The legend returns to the island

We are happy to announce that SuperMartXé Group, considered one of the biggest Spanish promoters, returns this summer to the island with its star party, SuperMartXé.

Under the claim “Evolution, Revolution”, SuperMartXé returns to Ibiza to celebrate what will be its 10th season on the island and we already anticipate that it will be #Massive.

New sounds, great techno, house and tech house international artists (soon to be announced) and as always the greatest artistic and technological display on stage, of which it has been their home on the island, Privilege Ibiza, the biggest club in the world according to the World Guinness Record.

FRIDAYS – IAMARICHB**CH – from 1 June until 28 September

Every Friday starting from 1st June until 28th September

I AM A RICH B**CH the biggest hip-hop and reggaeton party on the island announce its third residency year at Privilege.

Opening on the 1stof June and running every Friday until the 28th of September, Ale Zuber, the pioneer of urban in Ibiza and his crew (djs, dancers, artists and guest stars) will wait for you every Friday night at the biggest club in the world.

Closing the season in 2016 with the rapper Busta Rhymes and last year with the singer BAD BUNNY, ALE is ready to hit the stage with his new show and a big international guest soon to be announced.

Don’t forget that Fridays at Privilege Ibiza are all about IAMARICHB**CH!

Ibiza’s freshest party is ready and waiting to make a huge impact again this summer, and now SolidGrooves at Vista Club reveals the line-ups for their most impressive season to date. It kicks off on June 10th and runs until September 23rd with big hitters like James Zabiela, Nick Curly, Dense & Pika, wAFF, Dennis Cruz, Guti, Prok & Fitch, Audiojack, Josh Butler, Huxley, Catz N Dogz, Cuartero and many more all playing.

SolidGrooves has blown all the competition out of the water in its first few seasons. The energetic night has made Vista Club its own and each week the famous club becomes a real sweat box with knowledgeable music lovers going hard for the duration. Amongst the smoke and lasers and pumping sound system, it makes for one of the realest and most authentic party experiences in Ibiza, and this season is set to beat all previous records with the biggest line-up of international stars yet.

It all kicks off on June 10th with an opening party featuring a secret guest plus Nathan Barato, PAWSA, Michael Bibi, Eddy M B2B Reelow and Franz Costa. The week after brings Spanish tech tastemaker Dennis Cruz to the party next to ANOTR and Maze & Masters as well as residents, while June 24th is a special event with Kaluki and Cocoon associate wAFF, plus PAWSA, Pirate Copy b2b Pete Zorba, Calvin Clarke and Wan Issara.

July keeps the big names coming with a special back to back between two giants of the scene in Huxley and Josh Butler on the 1st, then on the 8th Kaluki come back for round two with Richy Ahmed playing with regulars Dennis Cruz, Pirate Copy, Pete Zorba and founder Michael Bibi. The rest of the month finds Cuartero, playful Polish duo  Cats & Dogz and Moon Harbour’s Leftwing & Kody all bring the SolidGrooves before Kaluki are back with Detleft, Nathan Barato b2b Carl Lio, Dennis Cruz b2b PAWSA and more.

September includes a return for Josh Butler on the same bill as Audiojack on the 2nd, then Crosstown Rebel Guti brings his mesmeric live show on the 9th with 8Bit label head Nick Curly, and Portal link up with SolidGrooves on the 16th for Secondcity, Pork & Fitch and more. The final closing party is set to be a huge one with two special secret guests playing back to back and hot breakthrough producer Latmun, PAWSA, Michael Bibi and Eddy M b2b Reelow all getting in on the action.