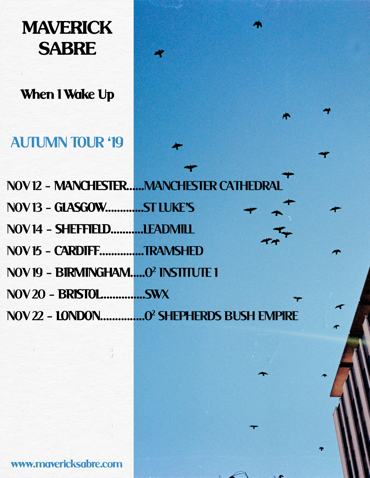 Following on from the release of powerful 3rd album ‘WHEN I WAKE UP’ storyteller, singer, songwriter and social commentator MAVERICK SABRE announces his Autumn tour, taking in 7 dates across the UK with the final stop being London’s O2 Shepherds Bush Empire on November 22nd.

Currently in the midst of his EU+UK ‘WHEN I WAKE UP’ album tour – which boasts a run of sold-out dates – these extra November dates will see MAV take his full band experience to Manchester, Glasgow, Sheffield, Cardiff, Birmingham, Bristol and London.

The new record – independently released and featuring stand-out collaborations from long term collaborator and friend JORJA SMITH and Grammy nominated star CHRONIXX – is the Irish artist at his finest; a raw statement of intent that explores themes around love, hope, war, faith, society, emotion and much more.

Catch MAV and his band at one of the ‘WHEN I WAKE UP’ Autumn tour dates below;