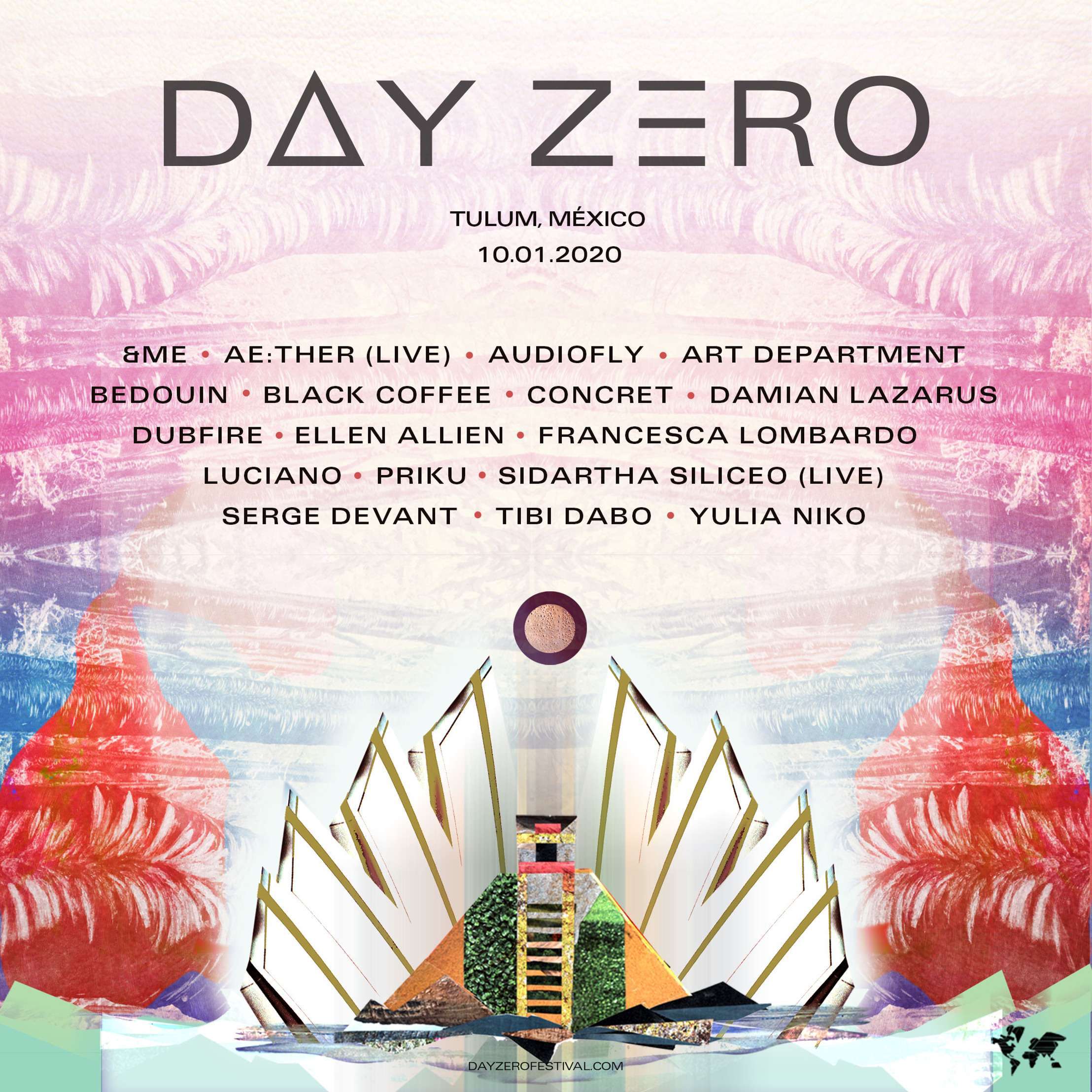 A cosmic collision of ancient tradition and forward-thinking electronic music heralded the birth of Day Zero on the final day of the Mayan Calendar in 2012. The result has been six sessions of sonic wonder and a convergence of party-people from every corner of the globe around the scion of Damian Lazarus. Deep within the mystical jungle of Tulum, this community of ritualistic nomads gathers before some of the world’s most exciting selectors and live acts for an eighteen hour journey.

Musical voyages stand at the center of the Day Zero experience with its artists acting as the beating heart that carries partygoers from sunset to sunrise. Damian’s careful sonic curation guides this transformational pull, with each performer fitting perfectly into their own destined chapter of this marathon epic. The 2020 edition welcomes some globally leading selectors into the Day Zero fold for the first time including Chilean-Swiss house and techno icon Luciano, Berlin electro innovator Ellen Allien, the inimitable Grammy winning producer Dubfire, Keinemusik’s &ME, and eclectic Italo-Mexican talent Concret. Romanian minimal innovator Priku, championed by contemporaries like Rahdoo, Raresh, and beyond, also makes his debut.

Live instrumentation will continue to take center stage at Day Zero, following the recent debut of Damian’s Get Lost Live concept in New York this month with Mashrou Leila and Kelsey Lu. The Crosstown championed, Berlin based Ae:Ther will showcase his other-worldy productions with a hardware infused performance following his recent debut under the Day Zero banner in Masada. Sidhartha Siliceo remains an integral part of the festival’s fabric, returning with his modern take on the classical music of North India.

The Day Zero experience hangs on the pillars of immersion and cultural connectivity, sharing space between the ancient world and modern mankind. From sunset to sunrise, each moment is woven within the fabric of the venue’s energy, bubbling up from its caves and cenotes into its naturally formed amphitheatre. This connection with surroundings and self is what’s helped create the ideal environment for experiencing the world’s best electronic music.

This essential link with the natural world and local community has shepherded Day Zero’s commitment to fostering an environmental sustainability program that will ensure the event’s continued return to the ancient land. The Day Zero team is dedicated to this process and enlists industry professionals whose sole purpose is to leave the venue cleaner than they found it and free of dangerous pollutants.

Day Zero returns to Tulum on January 10th after its September 27th debut at the world-heritage site of Masada in Israel, where 15,000 people witnessed the sun rise over the Dead Sea. The ongoing evolution of the event’s story is why Day Zero is revered as the epitome of modern rave, offering its global community a path towards transcendental  awakening — wherever it may land.

Day Zero in the Press:

“…a party that exceeded all of the already lofty expectations his reputation had placed upon it, and this author wouldn’t be surprised if Day Zero will become the cruelly unrealistic benchmark for all parties of this nature to come.” – Billboard

“Despite the wild, lawless feeling that remains in the tree-lined jungle backdrop, no detail is considered too small to help create the event’s atmosphere” – Mixmag

“Having come to understand firsthand the genuine thought, care, and passion put into bringing Day Zero to life, I had a whole new appreciation for the poignancy a rave could have in the middle of a jungle.” – Paper Mag