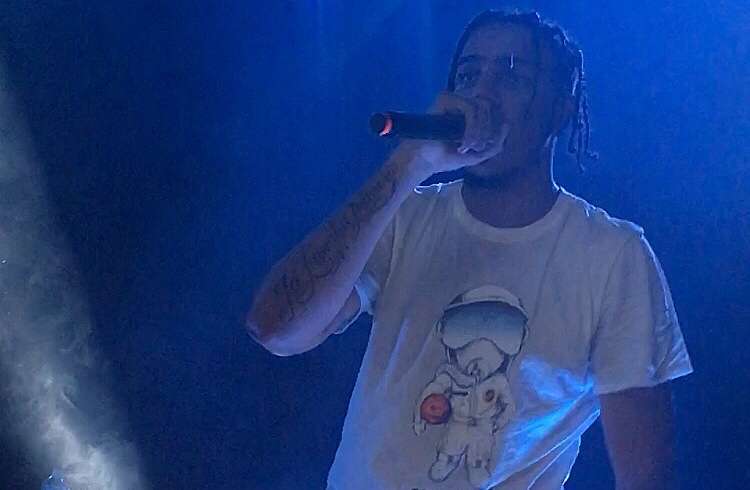 AJ Tracey got every member of the crowd raving at his Manchester gig at the Manchester Academy; as part of his ‘Secure The Bag’ UK tour.

As it hit 9pm one member of the crowd shouted, “Come on AJ” …The packed audience then repeatedly chanted “AJ!” until he briskly arrived on stage. Keeping relaxed and calm the London MC performed songs from his popular ‘Secure The Bag’ EP, sending the crowd into a frenzy.

The 23-year-old artist’s hard delivery of his bars and the hook-filled grime gives AJ a distinct style. Combined with meaningful lyrics that explore his rise to fame plus lyrics that cover issues in the culture, he makes waves with the songs from his new EP.

Performing hit tracks like ‘Luvd U’ and ‘Blacked Out’ made the people go mental, with some fans even dangerously climbing onto each-other’s shoulders inside the rammed crowd. It was obvious that everyone knew the lyrics to knockout songs like ‘Pasta’ as the voice of the crowd could even be heard from outside the arena.

Getting everyone chanting ‘Secure The Bag’ he additionally played hype tracks like Skepta & ASAP Bari’s ‘It Ain’t Safe’, and Skepta’s infamous ‘Shutdown’. This created a thrilling atmosphere, and giant mosh pits that sent the fans wild.

Even though he didn’t bring out any special guests, AJ said “I couldn’t bring my brother Dave out today but I’m gonna do this banger for you.” The fans went mental as the track ‘Thiago Silva’ (AJ’s viral collaboration with the rapper Dave) started.

AJ’s last track ‘Quarterback’ was the wildest, as he delivered his popular lyrics, the song was blended with a ‘DJ Russke’ type house beat. Reloaded three times and exclusively freestyling over the beat, it was obvious AJ Tracey had delivered on this Manchester gig, and most definitely ‘Secured The Bag.’

Here is a clip of the madness at the gig!