In the year in which BBC Radio 1Xtra celebrates its 15th anniversary, 1Xtra Live came to Manchester. An array of amazing artists took to the stage to deliver remarkable performances, plus two special guests.

The concert was hosted by the 1Xtra DJ family, with the likes of Yasmin Evans, Charlie Sloth, DJ Target, and Mista Jam hyping up the crowd and getting everyone excited for the performances.

Manchester’s own Stef Smith kicked off proceedings with a specially-commissioned track for 1Xtra Live (which played on the two huge screens). Fans were not left disappointed as one after another each artist delivered incredible performances.

Bringing the ‘trap soul’ sound from Louisville to the UK & fresh off his tour; Bryson Tiller opened the show in style, performing hit songs like ‘Exchange’ and ‘Don’t’.

2017 MOBO Award Best Newcomer and Best Song nominated Not3s followed, with wavy performances of his infamous songs like ‘Aladdin’ and ‘Addison Lee’, plus some of his new songs like ‘My Lover’.

Bringing the heat to the stage Stefflon Don and her dance squad got everyone dancing and singing, as she performed songs such as ‘Real Ting’, and ‘London’.

“This next tune is inspired by my mum, I had to let some people know you can’t mess with my mum, so make some noise if you love your mum.” Stefflon Don said passionately before performing her hit song ’16 Shots’. The crowd also got very excited as Steff performed her infamous song ‘Hurtin Me’ which went Top 10 in the UK; proving she is the ‘real ting’. 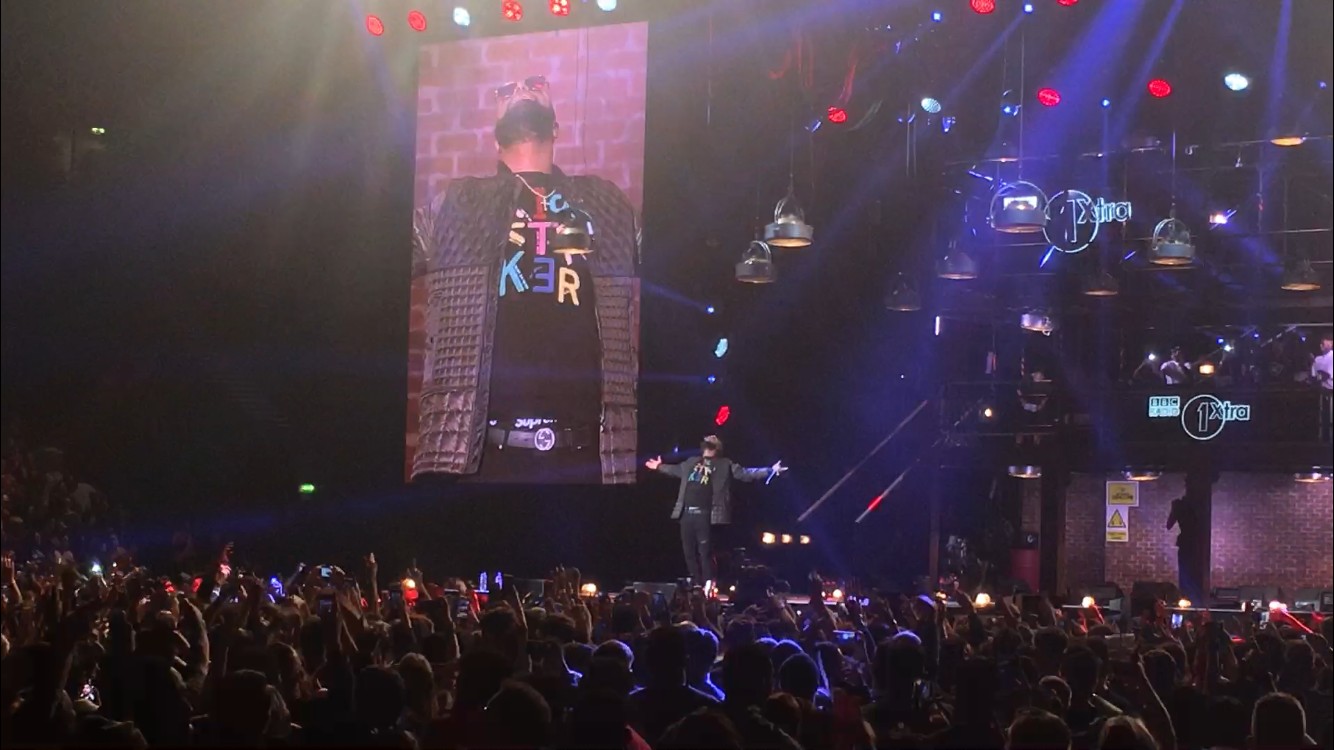 The don that is Donae’o got everyone skanking, raving, and dancing as he performed his fire tracks. From songs off his album ‘Sixteen’ to collaborations like ‘Linguo’ and ‘Lock Doh’. The arena was also filled with lights swaying from side to side, as he performed ‘Love You Better’.

The rapper Ghetts gave a lyrically flowed performance. He also brought out a surprise guest… Shakka joined him on the stage to sing their amazing collaboration ‘Know My Ting’.

The rapper Bugzy Malone made a dedication to the victims of the Manchester Arena attack. Before performing ‘Memory Lane’ with Tom Grennan, he said “I want to dedicate this whole performance to the people we lost at the Ariana Grande concert earlier this year. I dedicate this next track to the people that lost somebody.”

Hip hop sensation J Hus took the stage by storm as he performed famous songs such as ‘Did You See’ ‘Friendly’, and ‘Spirit’, likewise joined by two of his friends on stage they danced in sync to his track ‘Plottin’. J Hus also made the crowd go wild with huge mosh pits to his hype song ‘Clartin’.

There were also some unexpected special guest performances that sent the crowd into a frenzy. The first surprise guest was none other than Michael Dapaah aka Big Shaq, who took Charlie Sloth by surprise as he interrupted his hosting to say “YO Charlie.”

“Oi Quickly I wanna shout out my girlfriend from year 3 what you saying baby, yeah you left me I know you want me back but you aint gonna get me.” He said, before sending everyone crazy with his hit song ‘Man’s Not Hot’; it was evident that everyone knew the lyrics as it was clear that he had one of the best crowd reactions of the night. 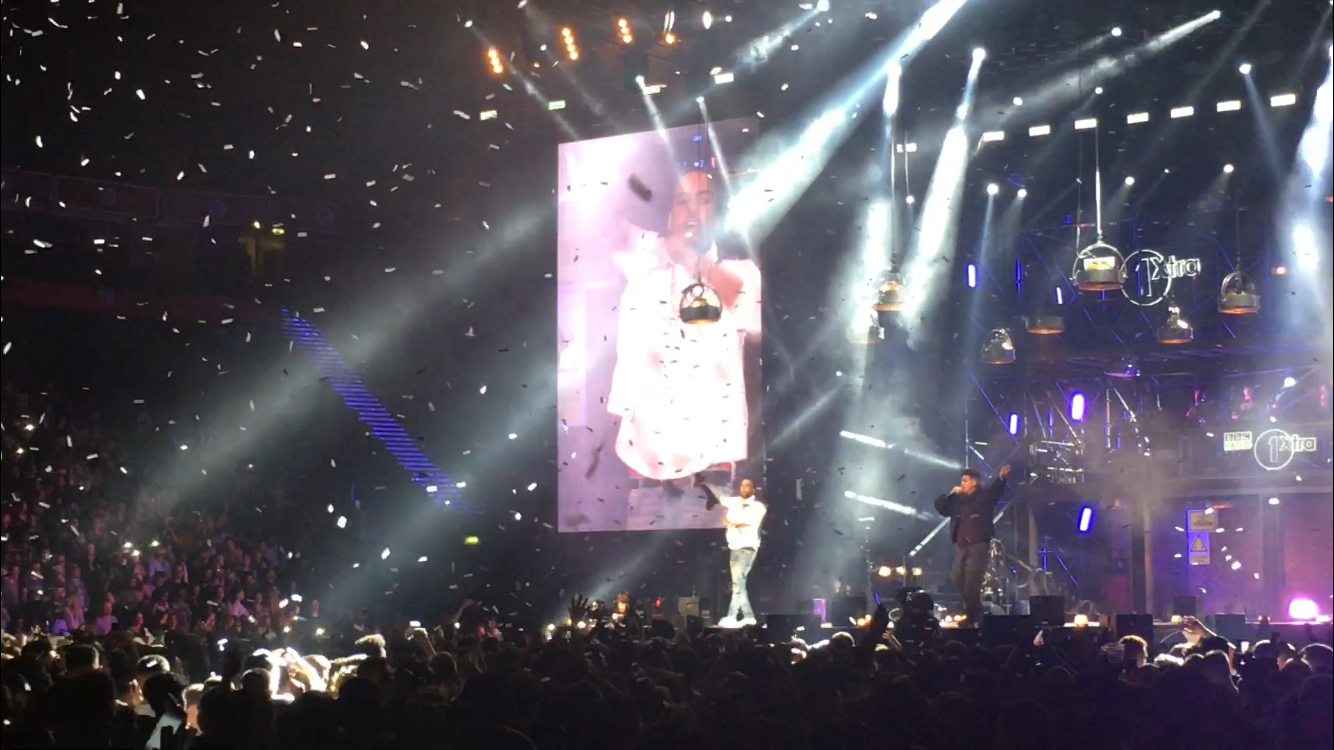 International sensation French Montana was the other surprise act; delivering an ‘Unforgettable’ performance. The look on everyone’s faces was complete shock and excitement to hear Charlie Sloth and DJ Target announce French onto the stage.

Giving everyone ‘Goosebumps’; Travis Scott proved he was the real Goat closing the concert with incredible performances of songs such as ‘Butterfly Effect’ and ‘Antidote’. Two members of the audience even jumped on stage, but quickly got caught by security. The atmosphere was electric, with every member of the audience up and raving, and with the standing audience creating huge mosh-pits Travis’ performance was momentous.

With every artist and DJ contributing to an amazing experience for the audience, plus an amazing concert; 1Xtra Live definitely delivered this year.

You can watch highlights of BBC Radio 1Xtra on BBC iPlayer and here.