Beat-Herder Festival: A Magical Music Festival with Twists and Turns Around Every Corner

Walking in to Beat-Herder, I had absolutely no idea what to expect. I’d heard of the festival in passing now and again but never had I considered attending,
too busy with the bigger festivals and star-studded line-ups in Manchester.
However, about 33 miles north in Clitheroe, Beat-Herder has a different take on everything a festival should be
and after attending, I couldn’t agree with their stance more. 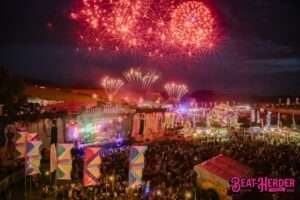 For one weekend a year Beat-Herder welcomes a wonderfully diverse crowd from all across the country to a nature-surrounded festival site in the heart of the Ribble Valley District.
A site that is small but jam-packed full of surprises round every corner for punters, over 20 stages of differing sizes litter the lush landscape.
Some of which are hidden through small doors and quaint corridors, some of which are huge and kitted with multiple rigs. With this being said, sound quality is never surrendered,
no matter how big or small the stage is. It really seems as if sound quality of the rigs at each individual stage was front of mind in the production of Beat-Herder Festival,
this is especially refreshing as it seems as if this kind of priority is dying in UK festivals, but not at Beat-Herder, Music comes first. 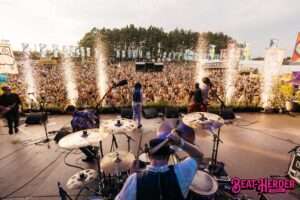 Let’s talk about the music then. When I first initially looked at the line-up, I wasn’t particularly aware of a lot of the acts
and at first, I was apprehensive as this wasn’t something I was used to. However, from the get-go, my unfamiliarity with the line-up allowed me to just float about
from stage to stage and take in the different sounds on showcase, I discovered a lot of great talent over the weekend.
Music was of very high standard throughout the festival, no matter the stage I visited the beats were pumping and the crowd’s energy matched this.
Some highlight sets for me were Craig Charles’ Funk & Soul Club, the UK radio and TV legend played a wicked set of remixed classics that had the Main Stage crowd bouncing.
KiNK played a technically flawless live set on Friday night, utilising his kinetically powered modular synths to create thumping techno on the fly.
Marshall Jefferson span a plethora of house classics and captured a moment as the sun was starting to set on the Saturday night.
The festivals musical masterstroke was tied perfectly together by a wholesome performance from none other than The Wailers,
the legendary band played the classics as the majority of the population of Beat-Herder gazed on in admiration and sang along to every word. A truly magical end to a magical weekend! 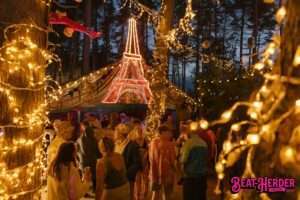 Everything from a versatile and exciting lineup, to the incredible production of over 20 stages, to the heart-warming communal atmosphere that seems to exist across the weekend.
If you enjoy music festivals, specifically dance music festivals, Beat-Herder HAS TO BE on your list. I couldn’t recommend it more.