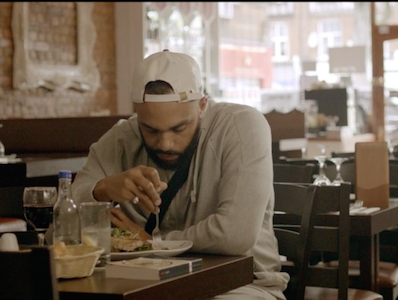 Haze – The Real Sound of the City

Haze talked to Unity Radio and talked to us about the thought and inspiration behind his debut film “Thinking Out Loud”.

You’re about to release your debut film ’Thinking Out Loud’, what made you decide to branch out in to film?
I had the concept for like three or 4 years for Thinking Out Loud, just a narrative of my thoughts whilst living on a day to day basis, I was just really passionate about addressing the reality of a situation that I know a lot of artists are going through, I’ve always had a passion for film though, but realised over the last few years, its the strongest if not 1 of the strongest arts, as in getting a message across to an audience. A lot of my music is message driven or reality driven, I just felt, and feel, with hard work I could cross over to that world and make an impact. I also feel our culture isn’t represented to the best of its ability in the mainstream. I can just feel music with time is getting more and more fickle, the attention span for the average listener is getting shorter and shorter, I’m still very passionate about music but with music and film I feel one hand can feed the other.

You have been an advocate of the UK Hip-Hop scene for many years, how far do you think the scene has progressed?
I remember the days when I used to tell people I rapped and they used to look at me like “Is this guy serious” lol.

When I first came on the scene the style of rap that most rappers had wasn’t accepted, you had garage n grime emerging, and if it wasn’t that or backpack rap you were lost in the wilderness. Where it is at now was partially a dream to see, I mean the industry thats a whole other entity, there are still only a few artists that get a chance to hit the top out here, but its a small country, and second of all, once the scene is self contained with some real power we don’t need anyone else, they will need us.

My biggest dream is for The real rap game to embrace UK, as you know, the next big thing, like we get our time like the west coast had its time, like down south, like the east coast. I want London or the UK to run the rap game or be the dominant sound of the global rap elite. Personally I believe we have been influencing them for years, but now I can see the recognition filtering through and there are big things on the horizon.

But to answer your question.. yeah I’m happy and proper excited about whats to come for the UK on a whole, and how far we have come.

Do you think it takes artists doing other things, such as film making, to survive in the scene?
Yeah, I believe it does take artists to venture into other things, most definitely. I mean there’s a whole other generation emerging from the scene and to try and stick to one field or not look at it like yo ” I can help these yutes coming up so maybe they don’t have to go through what I been through” would be selfish. I truly believe a scene isn’t built on rappers, a scene is built on positions, platforms and a lot more.

In regards to film, for me, that just feels right, its a passion of mine just like music, I can be a creative in film, but there are other business venture roads I’m going down also. I guess you just have to follow your path or your heart and see where it takes you.

The project is something that feels very personal to you, was it difficult to face the demons that you contend with, face on?
Nah I think its the easiest thing to do you know, for me personally. I mean demons wise I guess everyone has them, its if you listen to them or listen to the other side, and thats what I portray in the film, there’s been so many times in my life I could of easily gone down a road if I listened to my demons, and I’d either not be here on road, or I’d not be here at all, because I am not a half foot in kind of person, I’m all the way or nothing.

The film and album helped me get a lot off my chest that I normally would have to hold close to my heart. I mean I’m a very personal person and keep my stuff to myself so in a a way the music and the arts is therapeutic to me and I feel like my life is the way it is for a reason or has been for a reason so its only right I let people know the journey so they know, as artist’s in the UK, at this day and time its documented what we have to go through or what I was going through.

What have you learned about your involvement in film that differs from music?
Film on a whole is a lot different to music, I can feel already its not as much a crabs in the bucket mentality, but I haven’t been in it long enough to compare properly, but to be honest, I like the feel of it.. the vibe.

There’s a huge 21 tracks set to be released on your album, what are your personal favourites and why?
My personal faves would have to be: ‘Confessions of a Clean Heart’ because I really got to express a lot on this song, it really is my confession to the listener, it’s honest, true, and when i hear it, it just feels timeless, there’s so many layers to it.

‘Made In Love’ because Maverick Sabre is my brother. Love that guy and the song is about my two sons that really changed my life, I kind of talk to them on it, you know so later on they have something to listen back to in the archive from this moment in time. ‘The revelation’ because its just brutally honest, when my girl heard that she cried because she knows where I had been at in my life and was with me and it touches on it. It’s very personal & again honest.
‘On my Own’ too, because its like a middle finger up to all the fuck boys and fake people I’ve encountered on the way that I thought was my people. lol. But honestly I love all the songs on there. They’re all dope honest, true and personal and are taken from this chapter in my life.

Will you be making any more films moving forward or are you branching in to anything else that we need to watch out for?
Definitely film. You will see things in the future, everyone is trying to push me towards the acting but its not a passion, if I can use it as a tool to get somewhere or earn some cash lol then maybe. Business wise there’s some stuff going on behind the scenes, you will see in the next couple years but don’t wanna talk on it just yet. But paperworks being signed and moves are being made.

You’ve worked with some huge artists in both the U.S and the U.K, do you have any plans for any big collaborations in the pipeline?
Nah not really, I want to put artists with artists that make sense UK and US, but as for me, I don’t know, its got to make sense and just happen organically like all my other features.

If you had to describe yourself to someone that had never heard about you before, what 10 words would you use?
Authentic. True. Honest. Clean Hearted. Creative. Visionary. Humanitarian. Conscious. Being.