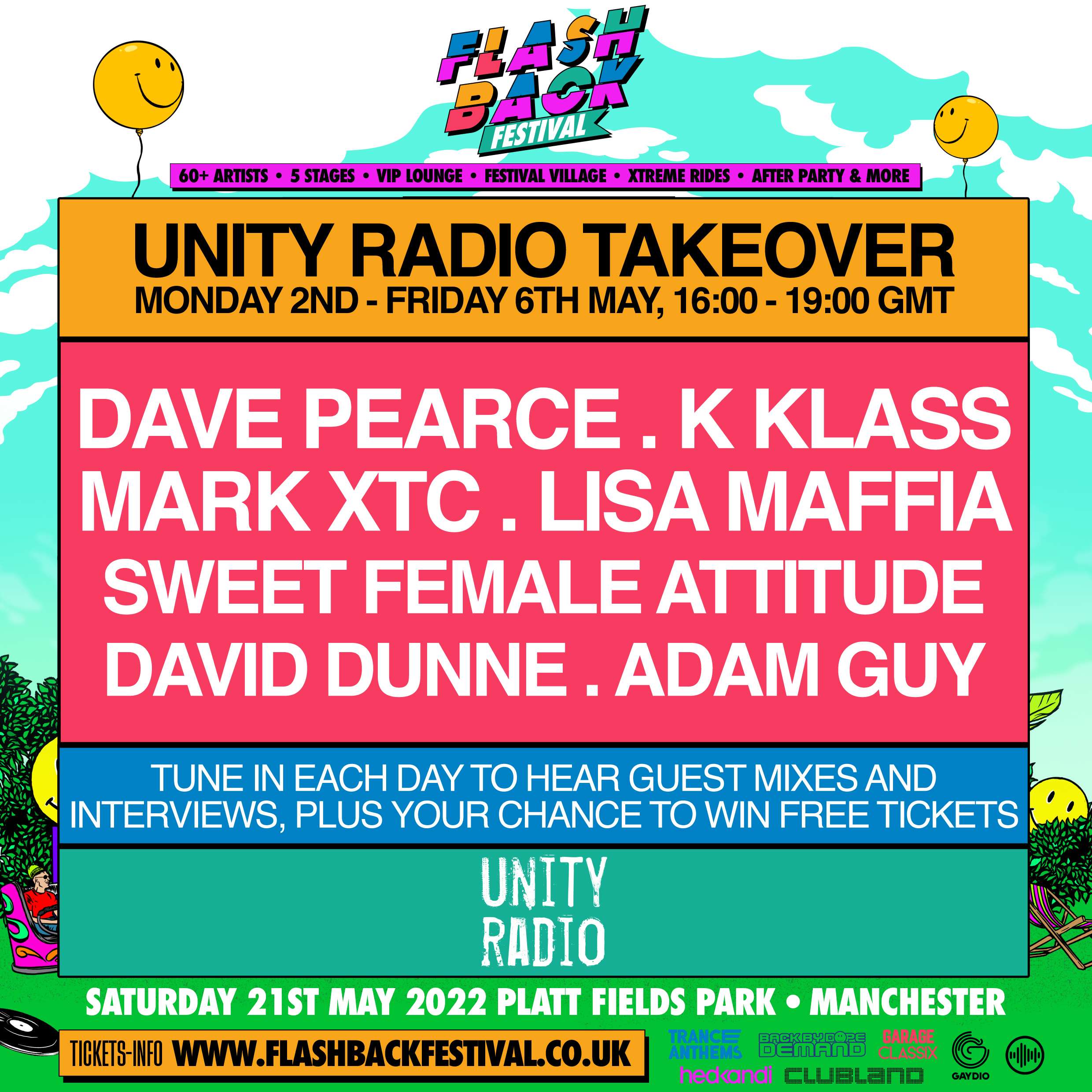 At the start of this month, Unity Radio hosted a Flashback Festival Takeover Week, where some of the biggest names from the line up joined us over the airwaves for interviews and guest mixes. We started the week off with a mix from Dave Pearce, a legend within the trance scene who has been doing his thing since the start of the 80’s. A disk jockey who started off spinning hip hop and organically transitioned into higher tempos as his sound matured.

The day after, we kept the fire burning by bringing a double header to our airwaves of two of the biggest names in noughties dance music: Sweet Female Attitude and Mark XTC. Both of which made their names throughout the dancing years of the 90’s and early noughties, Sweet Female Attitude being most known for their iconic vocals on garage banger “Flowers”. Mark XTC brings an entirely different sound however: grimy, dub-ridden drum and bass which would supply energy to any dancefloor.

On the Wednesday, Unity Radio welcomed K Klass on to the airwaves to discuss their illustrious career within UK house music. The duo, formed of Andy Williams and Carl Thomas, first burst on to the scene in the late 80’s however found prominence after their 1993 debut album “Universal”. This album housed some of UK house music’s most iconic tracks; from “Rhythm Is a Mystery” to “Let Me Show You”. It’s easy to hear why K Klass were so popular, they soundtracked a generation.

Thursday saw us welcome none other than Lisa Maffia of the So Solid Crew on to the Unity frequency. Legend is an understatement! Lisa Maffia still remains as one of the original pioneers of women in UK garage, both through her work with So Solid but also her solo stuff. The importance of Lisa Maffia’s prescence within the So Solid Crew undoubtedly influence so many female voices in the UK rap scene today, whether they know it or not. Its still good to see Lisa Maffia making waves on our TV screens as she hosts reality shows, her longevity in the industry is commendable!

Last but not least, to cap off Flashback Festival’s Takeover Week on Unity Radio, Friday saw us welcome David Dunne. David has played countless gigs spinning some of the best House & Disco anthems from your childhood! There is absolutely no doubt in my mind that David Dunne knows how to get a crowd moving, the energy will be real.

Listen back to all the mixes and interviews here:

There are still a very, very small amount of Xclusive tickets via Unity Radio’s Xclusives partnership with Flashback Festival. You can buy tickets via this link for just 25£ https://www.unityradio.fm/25-xclusive-tickets-for-flashback-festival-platt-fields-park-manchester/. Act fast!