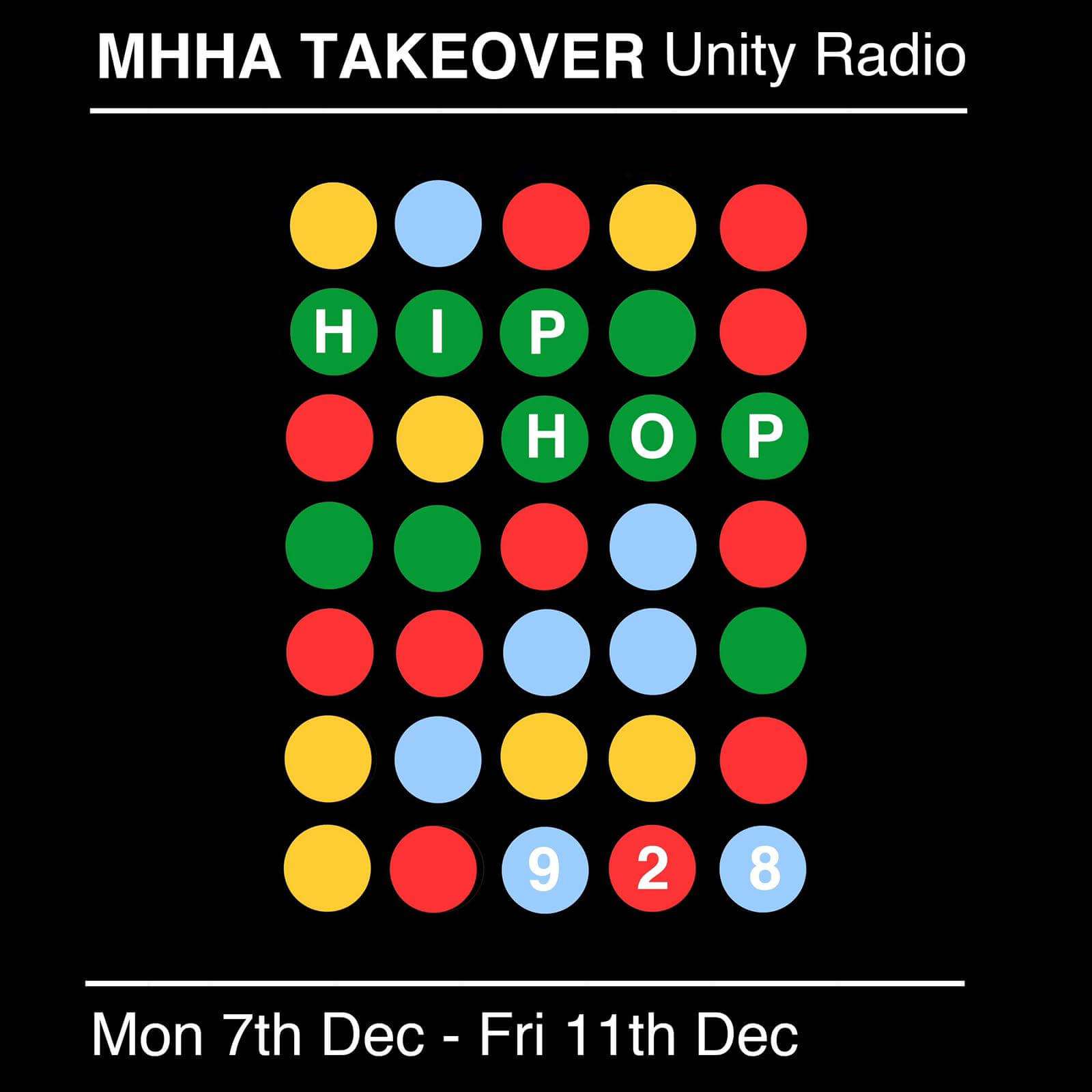 For the final week in our month long series of weekly of Hip Hop element takeovers from the Manchester Hip Hop Archive ,  we celebrate  Rap and DJ culture.

All week across the Network on the Unity Radio Breakfast,  catch Molly as she introduces Hip Hop pioneers from across the decades, playing music from each period. This week we also hear from some of the MHHA team involved in building the archive! Hear from, Trish Cartner, the MHHA Youth & Volunteer Coordinator, introducing some of the young volunteers working hard behind the scenes.

As part of the finale, championing Hip Hop music,  the takeover extends deep into the night with daily 9-11 pm show, from first generation Manchester Hip Hop legend,  Sefton Madface, dropping wisdom and facts. Join Sefton, taking audiences on a musical journey from the early roots of Breakbeat and Electro, through Rap invasion to the  Pioneers of  the present day! A 40 year span of the global music movement shaped by Youth culture started  out by just a few on the streets of East New York.

Molly introduces  Sefton Madface, to the Hip Hop Music Takeover week and our Breakfast listeners, providing  information on what to expect from his daily  9-11pm show, looking at the early years of Breakbeat and Electro 1977 -82.

Lock in to the Manchester Hip Hop Archive Takeover today, where I will be speaking with Youth & Volunteer Coordinator, Trish Cartner, talking about the role and work taking place at the Archive, including, the exciting development of a Hip Hop Education Programme which will be launching in Schools across Greater Manchester, from Jan 2021 onwards. Trish, is also joined by Kata, a young volunteer and Archive trainee, who shares her own experience of the opportunities and benefits volunteering provides, as well as, talking about some of her favourite tasks and highlights from the project, so far. Listen out for specially selected Rap music tracks, and volunteer recruitment messages, programmed by Volunteers, Kata, Jazz, and Thai! If you would like to get involved in Volunteering at the MHHA, email info@mhha.co.uk FAO Trish.

Following the Launch of the first in a series of five night time Manchester hip hop takeover shows with sefton madface – looking at the early roots decade 1970-1980, the MHHA return at 9pm, to explore the 1980s into the early 90s, referred to as may as the first golden age of Hip Hop! Lock-in, to hear tracks from LL COOL J, Run DMC, public enemy, the beastie boys,soul alongside the beginnings of the movement and growth of artists here in the UK, including , Derek B, London Posse, Hijack, Lady Tame, the Ruthless Rap Assassins, MC Tunes, and more.

Lock in tonight at 9pm for the @mcr_hip_hop_archive takeover with @seftonmadface and special guests, @mc_crystalize & Quest, from 90s Rap Group Subliminal Darkness
In the studio alongside the mighty @g.rok178

Listen in to Hip Hop royalty selecting and discussing seminal tracks and sharing key moments in the development of Hip Hop music and its influence in Manchester in the 90s.

Molly is joined by Manchester Rap Pioneer and special guest,  RIO, in the studio, as we look at the early years of Manchester Grime 2000 – 2010. RIO who was has pioneered Manchester Grime, will be in to play tracks from his discography, including his debut track, ‘Narrow Roads’, ‘Cant Stop We’ ft Mr Benz, and his recent release, ‘The Good, The Bad & the Ugly’ ft Misha B

Lock on,  as RIO drops tracks and shares highlights and achievements from his career to date, giving listeners an insight in to what can be expected for 2020 and beyond! RIO is fully back to business!

Molly drops tracks from the 2010’s – a more regular sound for audiences locking in to the Manchester FM since Unity Radio first took to the airwaves! Molly presents a selection of Manchester Rap talent, who  progressed from street corners  to household names, on the day that Unity Radio 92.8FM turns 10 years old with special guest interview from Pique Roscoe!!

At 9pm, the Manchester Hip Hop Archive are back for the Years 2000 to 2010.  A significant and defining period in UK Rap music, with the growth of regional sounds and a technology shift, to affordable  home studio kit, providing Rappers with means to produce, publlsh and distribute music from bedrooms. Hustlers and entrepreneurs shaped local music consumption with weekly mix tapes sold outside HMV on Market Street  and mix CDs in Eastern Block.

Fresh from his interview with Molly, Manchester Rap legend, Rio, joins the studio for some real talk and some surprises in store!!

Molly finishes of  her final Breakfast show for the final week of the Manchester Hip Hop Archive Takeover Music week with, a  celebration of Manchester Rap in the year 2020,  a year that no one will forget in a hurry.  Joined by special guest Ragoloco in the studio, to hear more about his conscious Rap and whats expected after his recent heat, ‘Kriss Kross’