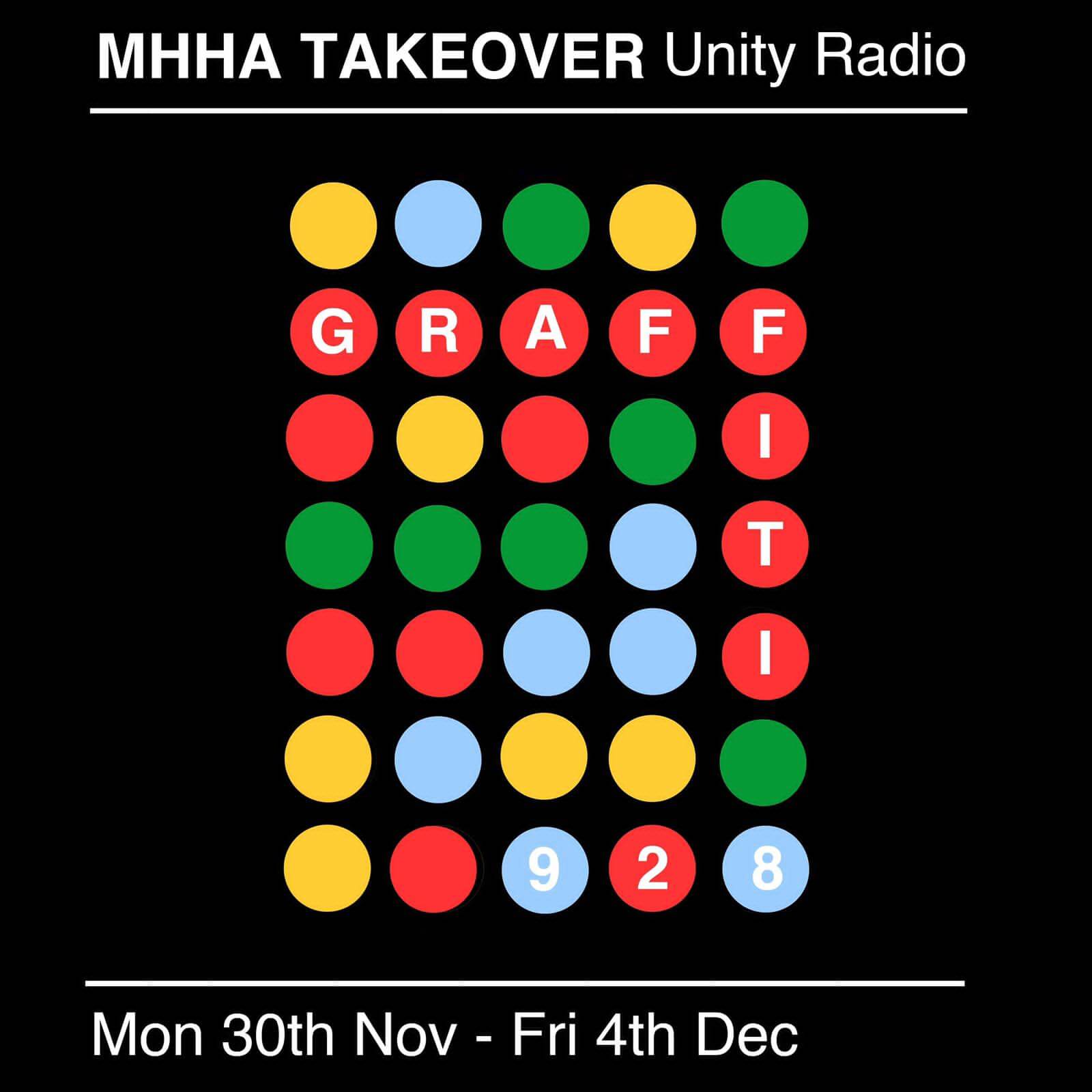 Join Molly Kennedy every week day morning from 08.00 GMT between Mon Nov 30 and Fri Dec 4, hosting the third  week in a series of month long takeovers, celebrating the Graffiti element’, as part of the @mcr_hip_hop_archive takeover.

This week on the Manchester Hip Hop Archive Takeover,

Lock in to Molly Kennedy on the Unity Radio Breakfast Show from 8.00 each weekday, for special introductions to Manchesters leading artists, through support from Researcher, Co-Founder, and Hip Hop Pioneer, Zach Turner. Listen in daily,  to learn about the pioneers and  influencers that shaped Manchesters infamous Graff scene.  Along with, a specially crafted soundtrack of Graffiti related Hip Hop music from across the decade, which contains messages and story’s from the underground and illegal sub-culture.

Molly introduces  ‘KREK’, one of the UK’s most progressive street artists…… A fun and colourful Graffiti Artist from the early 2000’s, KREK, served a prison sentence for his commitment to the element  going on to, carve out an international reputation as a highly respected large scale muralist with his distinct style.  Listen in to hear what Krek has to say about the city and culture.

Today MHHA talks to Graffiti Artist ‘DEfO MAYBE’ – A stylee artist who has established himself on the city over the last 10 years., producing  dope letters with bright colour combos, and Characters. He also experiments with painting in spray and posca pen for graphic style illustration prints.

Molly plays an exclusive interview between Zach and  Manchester Graffiti Legend,‘SKODE FYM NM’ , from the 90’s to the present day.

Well known for all forms of real graffiti writing, his European nationality has had a positive influence in Manchester Graffiti and writing styles.

Zach Turner, catches up with Street Artist, ‘SICK-BOY KKS’, the Manchester born writer, who moved South to become established as one of the UK’s leading commercial spray painting muralists.

To end the week Molly introduces the interview with,‘NOPE’ FYM, a leading and accomplished  female Graffiti Artist in the U.K who’s known for all forms of writing. .Listen in to hear ‘NOPE’ growing up on Graffiti in the 90’s.

The Manchester Hip Hop Archive, is the first single reference and resource hub for the Hip Hop community in the United Kingdom. It’s a unique platform for Hip Hop, Urban History, and the wider experience of grass roots inner city experiential history in Manchester. Launching Summer 2021, stay locked over the coming weeks to learn more about our local Hip Hop community and discover ways to get involved.