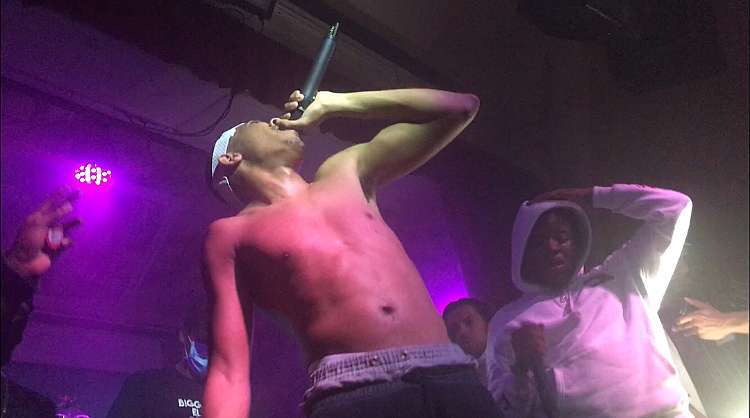 Saturday 23rd December 2017 is a day that will go down in history, for when talented artist Just Banco brought his wavey flows and Trapanese sound to Manchester, for his first ever Headline show.

Known for his iconic Trapanese genre and sound; Just Banco is a unique artist. His dynamic visuals and cold lyrics give him an incredible flow, and a distinct style.

The DJ’s for the night were Cee Gordon and K Tokyo who both warmed up the crowd. Supporting Just Banco for the gig were some of Manchester’s finest. Firstly, Two4Kay who most definitely brought the sauce to the stage, performing both released and forthcoming songs. Manchester’s Stef Smith took to the stage next. He got everyone vibing; with tracks such as ‘Got Your Money’ and his renowned song ‘Manchester Live’.

Rappers Culps and K Don brought there A Game as they got the crowd hyping to their tracks such as ‘Add It Up’, ‘Gotta Get It’ and ‘Faded’. Not to mention Nulwave, who certainly got the audience hyped as he performed his forthcoming single ‘Sportin’ Waves’. Every supporting artist came with a different style and flow, that just highlight some of the amazing talent in the city of Manchester.

The venue was rammed full of people waiting eagerly for Just Banco to make an appearance, and when he appeared to the opener ‘Going Missin’ there was not one person in the room that was not hyped. Wearing white ski goggles, the rapper seemed to occupy far more stage than just one man as he drove his whole body into every rhyme and lyric of the song.

The huge amount of support for the South Manchester artist was evident with people shouting and cheering from all angles of the venue. With multiple wheel-ups by DJ K Tokyo, Just Banco smoothly transitioned into his forthcoming song (produced by K Tokyo) which had everyone singing “Chun Li can you find her”. ‘Overdose’ was one of the first songs the young artist released, performing this song proved to be a nostalgic thing as such.

Bringing an organic rockstar like presence to the stage; Banco brought two very talented artists on stage to perform their collaboration. Two4kay and rapper Sleazy F emerged on stage, flashlights filled the venue as people chanted 0161. Looking more like brothers than friends, as they jumped, danced, and spat each lyric as if it was the first time they’d delivered it; the three artists got everyone hyped with their infectious energy.

The atmosphere was something not witnessed before…Multiple wheel-ups, people falling over, gigantic mosh-pits, and people shouting “mayhem”, as Banco performed another one of his saucy songs ‘Can’t Stay’; proving to be a real-life movie.

“WE BE TALKIN TRAPANESE”

Mosh-pits galore Just Banco got everyone on a new wave as he performed his newest single SOO YUNG. The room shook as everyone on and off stage bounced together, shouting the lyrics and revelling like it was a celebration. Taking audience participation to another level he even got in the mosh pit himself for the final song.

The supporting acts and DJ’s who warmed up the stage are also an example of the richness of talent in the city of Manchester. The raw energy Just Banco had was breath-taking. His versatility and Trapanese sound are cutting-edge, and quite like anything else. Performing a combination of released and new songs, the young artist has a rare mix of raw talent, stage presence, and humble competence. Giving the audience an early Christmas present; Just Banco showed everyone why he’s at the top of his game!